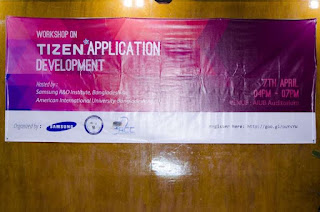 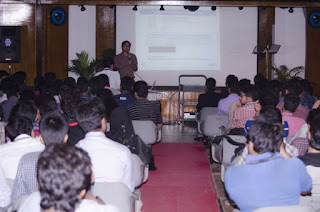 To start with, Mr. Raqibul lifted the curtain of Tizen OS, which is a linux kernel based operating system and handed away this OS based handset and wearable to the participants. He, then, opened up the basements by stating Intel is ambassador of its OS and availability of its source code in online so that one may easily get the best out of this open source operating system. Besides, to build this outstanding platform, many industries as well as collaborations with different universities help them make it possible. Currently, it is understood that there are various options in choosing an OS platform, but Tizen’s benefits were vividly explained after then. That is not it, the developers – working for Tizen – are also promised to get the full credentials after publishing their created app(s).

Mr. Arup, followed by, came in to share his part of speech, and he tried developers to become familiar with creating one application. In order to perform writing codes and develop an app, an IDE, Integrated Development Environment, as well as Tizen SDK was concisely demonstrated to show a bigger picture on how it would be executed on different OS platforms, Windows and Ubuntu. Besides, he also showed the features of IDE and discussed much about Smart Development Bridge, SDB. To contain a better understanding, explanation regarding image optimization was considered as well. 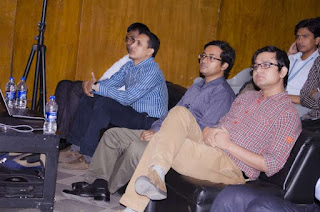 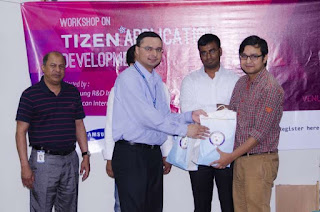 Actually, there are 3 basic categorized branches that a developer may work on, and building a native app was perfectly explained by Mr. Abdullah Al Baki in his speech. It is suggested development capability noticeably increases working for native app environment. However, different useful components on building native apps, such as, Enlightenment Foundation Libraries (EFL) and its components, design/ layout, Base Application Layout, UI widget & Framing, Creating basic GUI, File Processing for Project(s), UI Libraries, Making App Life Cycle, Adding window, confrontment, buttons, labels, so on and so forth were efficiently demonstrated by the speaker. Plus, there is a dedicated reference site suggested for developers, developer.tizen.org, at where every pieces of necessary information can be found.

After an eventful session, Mr. Farruk Ahmed then came in to spread the knowledge of web application for Tizen. At first, he explained the basic foundations of web development, for example, understanding about HTML, CSS, JavaScript, HTML5, jQuery; however, it is highly advised that to perform web development in Tizen, it would be better having clear conception over HTML5. Besides, Mr. Farruk went through some really interesting points in order to build web app from good to better by knowing each component provided by Tizen itself for community developers, for instances, File Formats of Packages, Package Directory Structure, Obtaining privileges from other apk, i.e. social API, communication API, i/o API, UI Component, i.e. TAU button, bubble list, TAU slider, etc. In addition, he shortly demonstrated project creation in order to build an app, and he shared his opinions: though web application takes much time to run than native app, it will be possible to reduce the run time delay following his stated methods. 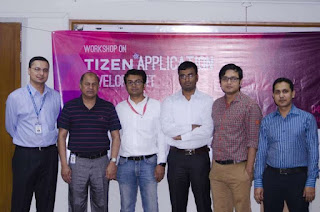 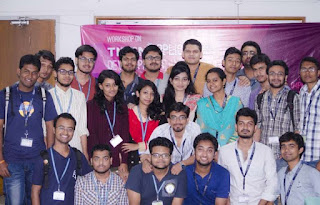 All in all, it was an eventful and greatly appreciated workshop for participants’ perspective judging on their flow of communications with the satisfied speakers throughout the event; however, they welcomed queries to be sent over via email and posted to the community created by them for AIUBans to help their developers work spontaneously. At the end, Dr. Tabin Hasan and Dr. Dip Nandi handed over token of appreciations to the respected guests for such a successful workshop promising to hold more workshops in near future so that developers may continue exercising Tizen Application Development under being in SRBD’s supervision. It was indeed a proud moment for ACC family to raise the bar high to let the CS students of AIUB familiar with what sorts of opportunities are coming for them in days after.